Posted by: vivian on July 10, 2019 in Arts & Entertainment Comments Off on Artist plans to hold national xẩm festival

Traditional artist Mai Tuyết Hoa and her troupe Xẩm Hà Thành have released their first album of xẩm (blind busker’s singing). She has spent more than 20 years performing and studying xẩm singing. Hoa is seen as one of successors of the late master singer Hà Thị Cầu. 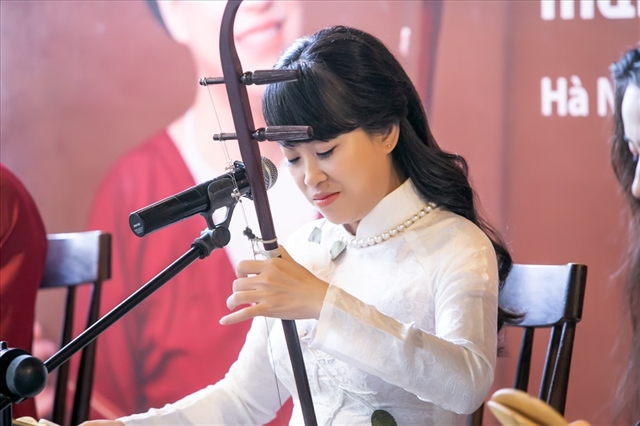 Could you tell how the album was made?

At first, we spent our money to make the album. We have a weekly performance at King Lê Temple on Lê Thái Tổ Street. Hoàn Kiếm District provides us with a small amount of money. Plus, we earn from VNĐ200,000 to 900,000 (US$9 to 40) for each performance.

We intended to use this income to make the album but it was not enough. So we contributed our own money.

When we finished the album we received financial support from Thiện Tâm Fund. We will co-operate with this fund and the Department of Culture, Sports and Tourism of Ninh Bình Province to organise a national xẩm singing festival and hold xẩm singing classes in the province.

You have foreign students who are learning xẩm.  What can you tell us about these students?

When foreigners come to Việt Nam to learn xẩm singing they study hard. Folk music is a vast treasure. It is difficult to get to know xẩm in a short time.

In one month, students can start to understand what xẩm is. Most of them learn to sing and play the nhị (two-string fiddle).

I have a French student who plays piano well. He has learned nhị and xẩm singing in one and a half years. He doesn’t work in Hà Nội anymore and has gone back France temporarily. He has asked me for more pieces to practise at home.

Another student of mine is an American girl. She is student at Yale University and she knows violin. She spent a month studying with me and now I continue to teach her online.

Do you also train Vietnamese students?

Yes, we focus on art students such as those learning chèo (traditional opera). We really want them to keep the traditional arts alive, but is is a difficult mission because xẩm cannot help them to survive. They still have to earn money through their other work.

It is not easy for them to pursue xẩm singing in the long term because they do not see a future in it. I myself don’t know how the folk genre will develop in the future. But my troupe and I will try our best to keep it going.

Do you remember the first and the last meetings you had with late master singer Hà Thị Cầu?

One of the last times I saw her I was making a film about her for Radio the Voice of Việt Nam. At that time, she was in good health. Luckily, the weather was very nice while we were filming. Right when we finished it began to rain.

Before the film crew left, the artisan held my hand for a long time and told me: “You should try.” She couldn’t say it clearly but I understood her thought. She wanted me to do something to preserve xẩm singing, to which she had devoted her whole life.

I felt uneasy about her words. The next time I visited her she was weak and couldn’t say anything more.

The first time I met Cầu was with the artist Thao Giang and Professor Nguyễn Thuyết Phong. It was about 20 years ago. At that time, I studied her songs through tapes and I went to meet the veteran artist to get materials for my thesis.

I met her and we talked and sang together. She liked it very much because for a long time she did not sing.

Why did you want to learn xẩm singing when you were studying traditional instruments at the Việt Nam Academy of Music?

I used to work at Việt Nam Institute for Musicology and listen to a lot of old music and songs. When Cầu came to the institute to record I was an intern there.

I was assigned to listen to the tapes and discs and write down the notes and lyrics of different traditional genres such as xẩm, ca trù (ceremonial singing), quan họ (love duet) and xoan singing. I found xẩm the most suitable because I studied the nhị instrument.

The institute’s director Đặng Hoành Loan wanted all the staff to be able to perform some of the songs. And I choose a xẩm song to practice. It was fate because a traditional instrument student like me would normally perform in an art troupe. But from my second year of college I was invited to work at the institute. VNS

Previous: The capital city strives to 30 industrial clusters in 2019
Next: Most new landed property in eastern Ha Noi