Artist inlays folk paintings with gold to give contemporary edge

Posted by: vivian on October 25, 2020 in Arts & Entertainment Comments Off on Artist inlays folk paintings with gold to give contemporary edge 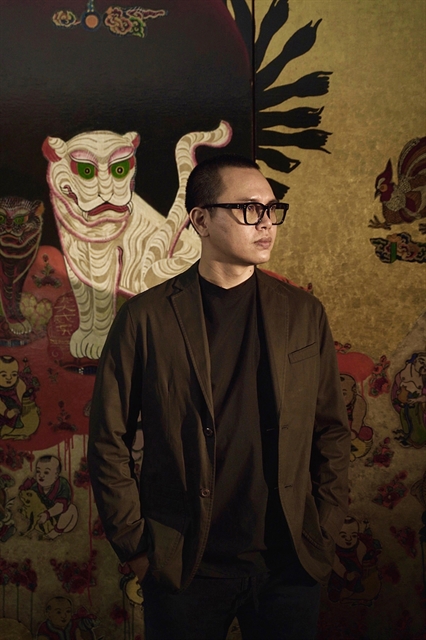 Contemporary artist Bùi Thanh Tâm has opened his solo exhibition Nothing Behind. Photo courtesy of the artist

The exhibition Nothing Behind kicked off on October 21 displaying 20 artworks created using collage. Some pieces are combinations of two or three 1.2m by 1.8m paintings.

The exhibition is divided into three subjects: War, Love and Belief. Using folk paintings as his materials, Tâm has created his works using contemporary methods and angles. The pieces are inlaid with gold expressing holiness with an impressive effect.

Painter Lê Huy Tiếp remarked that the collection marked an improvement in the career of Tâm and showed his breakthrough thinking.

“Tâm has made an impression with his paintings on modern society and the lifestyle of people in urban areas,” he said.

“In the original paintings, people were the main subject matter, but in this series, people are hidden and mixed with numerous objects. In some pieces, people appear as shadows.”

The theme of the exhibition is inspired by Andy Warhol’s statement: “If you want to know all about Andy Warhol, just look at the surface of my paintings and films and me, and there I am. There’s nothing behind it.”

“Warhol is not the only one who has this opinion, it’s an ideological trend and I am a follower,” said Tâm. “Life is everything on the surface, you don’t need to find anything behind.”

Before this collection he used folk paintings to encourage artists to preserve and draw attention to traditional art. Now Tâm said he wanted to combine the quintessence of traditional art in his contemporary artworks, giving old things new form and a new position in the flow of Vietnamese modern art.

Tâm developed the artworks by combining pieces and patterns from folk paintings then painting his own works over that base.

Cultural researcher Nguyễn Thu Hòa, co-author of the book on Kim Hoàng folk paintings, highly appreciated the effort and creativity that went into the paintings.

“Tâm has sophisticatedly cut and glued folk paintings together in an inventive and artistic way. I know that inlaying the gold leaf on the paintings takes a lot of time and money. The gold leaf is very fine and delicate. He had to work for hours in an enclosed space without wind.”

“Traditional values are raised to a new height thanks to this collection by Tâm,” she said.

Tâm was born in 1979 in the northern province of Thái Bình but now he lives and works in Hà Nội. He graduated from the Việt Nam Fine Arts University in 2009. He has displayed many exhibitions at home and abroad, including the Netherlands, Malaysia, China, Japan and the US.

The exhibition Nothing Behind will run until October 26 at the Việt Nam Fine Arts Museum, 66 Nguyễn Thái Học Street, Hà Nội. — VNS